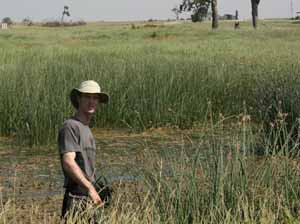 As featured in OSU's student spotlight:

Doctoral zoology student Jason Bried wants to give a voice to Oklahoma’s wetlands.This past summer, he traveled throughout the state getting data on undamaged wetlands in Oklahoma for a project funded by the Environmental Protection Agency."I chose to work here at OSU because there is a gap to fill,” he says. “Wetlands are an important resource. They support rare and unusual things.”Bried is studying applied odonatology, which explores how dragonflies may be used to advance wetland conservation.His love for dragonflies was born in grad school in Mississippi. After graduation, he worked for the Nature Conservancy in New York.“I was in the real world doing real projects,” Bried says.He has collaborated on several research projects for white-nose syndrome, a devastating disease that affects bats and has been found in the eastern part of the country and as far west as Oklahoma.He also has worked with rare and declining species of birds in shrublands, an area often overlooked when working with endangered birds.