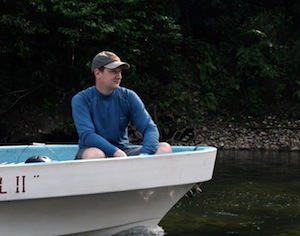 Oklahoma State University researcher Dr. Michael Tobler has been selected to receive the 2013 Young Investigator Award, a national honor given annually to a young researcher whose outstanding contributions best exemplify the ideals of Sigma Xi, the Scientific Research Society.

The award, which includes a certificate of recognition and an honorarium of $5,000, recognizes individuals for their scientific achievements, interdisciplinary research, and the ability to communicate the significance of their achievements to the public within 10 years following the attainment of their highest graduate degree. Tobler earned his Ph.D. from the University of Zurich Institute of Zoology in 2008.

"Dr. Tobler is an outstanding scientist who studies the evolutionary adaptations of animals to extreme environments," said Loren Smith, head of the OSU Zoology Department. "He has a terrific record of publishing scholarly manuscripts as well as receiving external competitive grants to fund his research. The results of his research have been well covered in the international public media and he obviously deserves this prestigious honor."

"It is a great honor earning such a prestigious award and receiving recognition for our research efforts over the past 10 years," said Tobler. "I am very grateful for this opportunity, but also for the mentors, collaborators in Mexico, Germany, and the United States, and my excellent students who have contributed to this endeavor."

Tobler joined OSU in 2010 and has been awarded several grants, the latest from the National Science Foundation to study fish in extreme habitats. He is also currently performing research on endangered fish and crayfish species with grants from the Oklahoma Department of Wildlife Conservation. Tobler recently studied the ecology, evolution and conservation of sulfide fish species in Mexico with a grant from The National Geographic Society. He teaches courses in evolution and introduction to fish biology to upper-level undergraduate and graduate students, and served as a consultant for a TV documentary on animals who live in extreme environments.