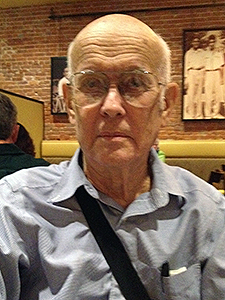 Zoology Professor Emeritus Herbert Bruneau, 84, died April 12th, 2013 in Stillwater, OK. Dr. Bruneau was born in Ontario, Canada in 1928. He received the bachelor's degree in Zoology from McGill University, and the Ph.D. in Zoology from the University of Texas. He was a zoology professor at Oklahoma State University for 40 years and was long associated with undergraduate education in the life sciences. He taught/co-taught the General Genetics class at least 75 times and was deeply committed to inspiring young biologists. Dr. Bruneau was known among fellow faculty for his love of his wife, Betty, their travels together, and a good glass of wine. He endeavored to teach many of us about the subtleties of oenology. After his retirement in 1995 Dr. Bruneau remained an active supporter of the Department of Zoology Seminar Series and continued to participate each semester until his death. Memorial contributions may be made in his name to OSU Foundation: The Herbert and Betty Bruneau Endowed Zoology Seminar Fund, c/o Loren Smith, Department Chair, Department of Zoology, 501 Life Sciences West, Oklahoma State University, Stillwater, OK 74078.