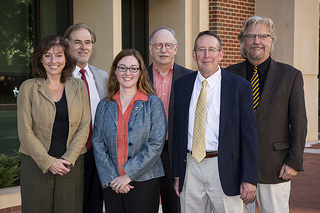 Loren Smith, Department Head, was recognized on 4 December 2013 during the annual University Awards Convocation at the ConocoPhillips OSU Alumni Center as one of eight recipients of the Regents Distinguished Research Awards for OSU, OSU CVHS and OSU CHS. This award recognizes faculty who have shown unusually significant achievement in their field of research.

Smith studies the natural dynamics and human-induced alterations of plains aquatic and terrestrial ecosystems. He is widely considered one of only a handful of experts on Playa Lake ecosystems. He received his first research grant in 1981, and his work has been funded ever since. His funding sources include the National Science Foundation, USDA, EPA, U.S. Forest Service and several state agencies and private foundations. He has published nearly 200 refereed publications with eight books or edited symposia volumes plus a long list of technical reports for government agencies. In addition, he has mentored 38 graduate students and has served on panels and advisory boards for several national and international agencies within his field.